Before I start explaining in gloriously in-depth detail about my week, I need to let you know that today I decided to go to the bank before the bank holiday started. This was an Amazing Decision, because today ALL the banks were having a party! When I went in, I was presented with a fruit smoothie and fresh fruit kebabs, then had to wait to be served while a group of children were photographed holding OBERBANK balloons. After grappling my way through the paparazzi (a less normal experience for me than you’d expect, given my celeb-status) I was presented with a stall giving me a pick of playing cards, key rings and notebooks. THEN, and only then, did I manage to get the counter, where I found out I have either been paid early or Mr.Zaheya E.Attar, Manager Emirates NBD {national bank of Dubai} Khalediya, who emailed me last month was NOT a fraudster! (because I have money in my bank account). I asked the person who gave me the smoothie why there were free smoothies. He replied, cryptically, that it was ‘World Saving Day’, and then refused to elaborate. In truth I don’t think he knew any more about it than I did – he looked about 15 years old. It’s obviously quite a big thing though as, leaving the bank, I saw the main square in Amstetten had a giant Sparkasse bouncy castle in it. This made me smile, because at the school ball, it was the manager of Sparkasse who I accosted and gave golfing tips to.

Enough about the banks, pleaseeee, I hear you grovel! Okay, here is what I’ve been up to J

Last weekend was a ‘long weekend’ as Austria celebrated its National Day. I wore my Dirndl as a sign of solidarity with Austrian independence, and we went to Vienna. FUN FACT: People in Vienna, as a rule, do not wear Dirndl. In fact, evidence suggests only one person was wearing a dirndl in Vienna that day (me.) Despite this, nobody really gave me any funny looks, though one little rascal did insult my shoes (this didn’t upset me too much as I know they are ugly shoes). We went to Heldenplatz where there were soldiers and a funfair. The centre of Vienna is pretty impressive, which a lot of huge white buildings. I was with another TA who had lived in Vienna for a while and so knew a bit about the history and stuff and she gave me the inside info. I could share this with you now, but I’ve forgotten most of what she said :S Everyone in Heldenplatz was having a great time. I captured the magic in this photograph, which I think you’ll agree is pretty goddam artistic: 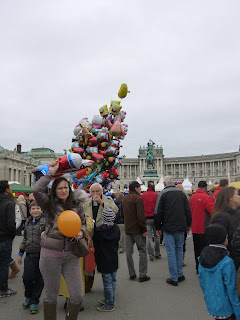 JUST BEFORE this photo was taken, a young man handed us a leaflet for the MAK museum open day, so we went. It is the museum for applied arts, and it was really great! We saw some kind of traditional eastern Asian drumming, got free tea, got a free poster, ate Vietnamese food etcetc

The most exciting thing about the day was that when we were wondering around the train station in the morning, I heard a musical, joyful voice calling my name. Then, appearing before my eyes in a hazy mirage of wonder, was my darling friend Eva who I haven’t seen for over a year!  She lives and studies in Vienna, and in the evening we went to her ‘WG’ and ate pasta. It was top notch.

On Saturday a TA friend got me a ticket to her ball. This was in Wieselburg, which translated means Weasel Mountain (lol), and was basically a young farmers’ ball. It was vast, with thousands of guests and some really talented dancers. I wished Jamie Smith had been there with me. Dancing with Jamie Smith was a life-changing experience for me, and I’d recommend it for any girl looking for a good time! He’s only good for dancing though, as his hair may be red but his heart is black.

We gave the disco a good go, but all the young farmers had got PISSED and were flailing around in a very unsightly manner. Managed to survive long enough to hear ‘Is This The Way to Amarillo?’ (I was the only one chanting WOLVERHAMPTON) then we escaped to see the end of a set by a 70s tribute band. When we left the ball it was snowing!!!!

Regular readers will be dying to know how my HOT BEACH CUBAN BOD 2K13 plan is going. Well, in the past week alone I have been to the swimming pool twice AND to my new POWER PLATE CLASS. The first time I went to the pool was for an Aquarobics class. I was pretty apprehensive, however my Expert Swimmer Housmate from Manchester (aka Jess) reassured me it would be full of old people. She wasn’t wrong! The class was run by a tanned, middle aged aerobics instructor with buns of steel who stood at the side of the pool and acted out energetic aerobics routines with unbridled enthusiasm and a terrifying grin. I didn’t feel much pressure to keep up with her though, as nobody seemed to take much notice of what she was doing. No matter what action she demonstrated for us to follow, the mass of elderly, bingo-winged ladies surrounding me merely bobbed up and down and generally displayed a complete disregard for the rhythm of the music AND the recommended dance routines. Every now and then one of the more enthusiastic participants would raise an arm out of the water and wiggle a bit, and at one point the woman in front of me span in a circle for about a minute.

The second time I went to the swimming pool, I took a friend, which meant I was even brave enough to actually do some swimming! I also tried out the slide and the sauna. The sauna was not good as it made me want to giggle and every time I giggled I breathed in a whole room full of steam and coughed and choked. We were in there for under three minutes. The slide was much more enjoyable. The swimming, however, was tiring, confusing and did not last very long. I’m going to try and go again though, and maybe if I keep practising I’ll get better.

Today, however, things took a turn for the worse. Getting to school for 7.30am means I always need a nap in the afternoon, and today my name lasted too long and I missed my power plates class! This may well be a good thing, however, because one of my teachers today said she thought I looked pale and suggested I have a good rest. This won’t be too hard, as it’s another bank holiday tomorrow and so I have a four day weekend!

To conclude, I give you the excellent news that I found a Mango Outlet store in a nearby town yesterday, and bought two wool coats for 25 euros each. I only need one, but I got a bit carried away. Now I’m searching for a nice hat to complete the winter look! I’ll keep you updated.