Ma and Pa in AustriAAA

I will start by informing you with great enthusiasm that I had my first roast dinner on Wednesday, as it was Thanksgiving and my friend in Amstetten (my only friend.) is American! She came over with a dead chicken in her backpack and then spent a good few minutes rubbing melted butter all over it, into every single nook and cranny. Luck would have it that this girl knows how to roast a bird – it was one of the best roast dinners I’ve ever had. The meat was so delicious and garlicy and moist and YUMMY IN MY TUMMY! We also had homemade stuffing, leeks and carrots, pomegranate (because I couldn’t find the cranberry sauce in Spar, because I don’t know the word for cranberry, but I did find a pomegranate), roast potatoes and grrrrravy. I had three helpings. Then we had apple crumble with ice cream. Then we had buttermilk pie, which is basically a normal pie case filled with a couple of kilos of sugar, butter and buttermilk. Here's a pic: 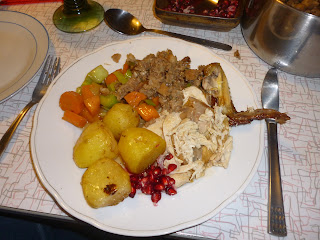 Kirbee let me keep the carcass. I popped it in the freezer and will boil it at a later date.

I didn’t have time to boil it this weekend, because the PARENTS were here! Upholding a strong family tradition, they missed one of their crossovers and were a teensy bit late, but this didn’t bother me as it just gave me more time to snooze!!! When they arrived I showed them the sights in Amstetten, which took all of four minutes, then we had schnitzel. The best thing about them visiting was I could say things like “oh, I know the best place to get schnitzel.” Little did they know there is only one place! But it made me sound like a genius. Also mother looked extremely impressed whenever I spoke German. Father was less convinced.
“Wow,” he sneered sardonically, after I completed an extremely long and complex telephone call with the car hire company in dialect(!!!) “You’ve learnt to say ‘okay’ and 'super' in a German accent!”
“I think you mean an Austrian accent,” I retorted coolly. The tension was too much for the small hotel room so we retreated to the hire car.

They were both suitably impressed with Melk, and we went inside the catacombs of the abbey and it was very good. The church there looks like somebody ate lots and lots of gold leaf and renaissance art work, then projectile vomited all over the walls and ceilings. In a word, I would call it ‘EXCESSIVE’. In two words, I would call it ‘VERY EXCESSIVE’! But also pretty awesome. The pictures just do NOT do it justice.

Then we spoke to a miserable Scrooge of a tourist office representative, who, after much pestering, finally revealed there was a Christmas fair we could go to nearby. This was held in a local castle and was a treasure trove of handmade goods! The locals charged large sums of money for all sorts of strange objects, our favourites were small angels made out of pieces of pasta and entire cribs encapsulated in a walnut shell. It was a marvel of the power of recycling. As I pointed out to the parents over tea and cake, the producers of Blue Peter would have pissed their pants at all the craft activities they could have stolen there! Mother didn’t approve of my turn of phrase, but still whole-heartedly agreed.

Then I took them to that nights Kulturwochen event, which was a local punk-protest-folk-band-thing and they sang some songs and gave me a free sticker! The lyrics were in German, but the music had an upbeat, toe-tapping, head-nodding, shoulder-wiggling tempo that kept all three of us entertained! The name of the band was WOSISIG, check them out on youtube, if you so wish! Most excitingly, the viola player from the ‘troupe’ (as mother would no doubt dub them) plays in the orchestra I’m in! our final performance of the season was on Sunday, it was a roaring success, despite the fact I missed several rather important cymbal-solos due to losing my place in the music. Turns out you cannot translate ‘to lose one’s place in the music’ literally into German, as when I tried to explain to my fellow tub-thumpers what had happened, they were pretty nonplussed. They smiled politely though!

On Monday we ventured in to Vienna. We saw a great deal of Klimt artwork, and also an impressive amount of Klimt memorabilia. The Belvedere art gallery has taken every object known to man, and covered it in Klimt. If this is something you think you’d like, pop over to the museum shop BUT BE PREPARED TO PAY BIG BUCKS. We had lunch in a little café that reminded me of my flat INSOFAR AS it was a bit of a time warp. Mother was rather taken with the waiter, mainly because he was wearing a bow tie, but also because he was ‘softly spoken’. I worked out that ‘susserdapfel’ is sweet potato and felt extraordinarily pleased with myself.

There then followed a rather long-winded quest for Christmas markets. I do not know Vienna that well, and I was following shady directions from a teacher friend that I could half remember, and for a while all we could find was some kind of soviet occupation protest (TYPICAL COLLINGSES!! Straight to the soviets! We can’t keep away!!!!) In the end we found a nice market with random things in it, and a stall that sold the sausages that are filled with cheese. Me and Daddy had one each, it was super!


I left them at the market so I could catch a train home. Father enthused greatly about my tour guiding capabilities. “Thank you for showing us around!” he said in a jolly, rumble-tumble sort of way. Mother was slightly more cryptic. “Yes, thank you for trying your best,” she said pleasantly. I chose to take this as a compliment.

I was (unfortunately) back in school bright and early this morning. I did a lesson about extreme sports and explained the difference between the ‘jumping’ and ‘leaping’ through the medium of mime. Turns out they like mime a LOT! They also like it when I read things out and then do a funny face. I then did a class about protests and accidentally showed them a photo with a big protest sign saying “DAVID CAMERON IS A C***”. Unfortunately the sign in the picture did not use cute little starts to disguise the foul language.  I had to very quickly skip to the next slide, which so happened to be the liberal democrat mock election campaign video we made in year 13. For some reason, the students did not seem to enjoy watching this as much as I did. However, I shall leave it here for you – my fans – to truly appreciate. It a nostalgic trip down memory lane, which MIGHT leave a bitter taste in your mouth (not just because of the Scottish accents!!!!)

Papa just text me (being rather wizz on the old mobile telephone). They've landed safely back in the UK and he said a good time was had by all. After I left them, mother apparently bought a new hat which is 'very becoming'. BECOMING WHAT!?!?!? We'll never know! Only four weeks until I’m back in the bosom of Blighty – so pumped!
xx