YOUR WITTY ADVENUTRESS RETURNS FOR ANOTHER THRILLING INSTALLMENT!

“ALL’S QUIET ON THE WESTERN FRONT!”
I chose that vaguely insensitive quote because I haven’t posted a blog recently. It’s actually completely irrelevant because I’m not on the western front and it’s NOT very quiet hear. My landlady has gone out for the evening so the ‘other woman’ is here (this is how she refers to her. I believe my landlady is trying to differentiate her from the ‘cleaning woman’, not from herself). Anyway it seems the ‘other woman’s idea of a good time is running up and down the stairs and banging the walls with a broom stick  - at least, that is what I deduce from the amount of RACKET emanating from upstairs. I haven’t met her, but I bumped into the back of her on the way out of the toilet. She was scurrying up the stairs (WITH HER SHOES ON MAY I ADD) so I didn’t see her face! ***FUN FACT: My toilet window has no blind or curtain, yet faces out onto the front porch. This means when people arrive at the house, and I am on the toilet, I am filled with the FEAR OF GOD that they will peek through the window and catch me unawares in an compromising position!*** 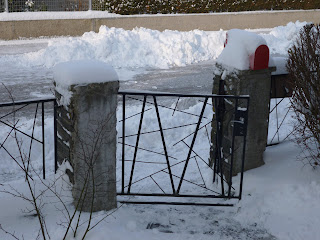 It’s been a rollercoaster couple of weeks so I shall try and just tell you the very interesting things that happened. The most interesting thing is that I had a special visitor from home! She came and slept on my sofa bed and she wore THERMALS, which was both practical and HILARIOUS! We enjoyed Amstetten as much as is possible, then went to Vienna and saw all the Christmas markets. Any seasoned shopper knows that Christmas time is the most violent time to go shopping of the year. Without meaning to offend, I must admit that it has become startlingly obvious to me that Austrian people have a penchant for ruthlessly throwing you to the ground as they barge through narrow, cobbled streets in the endless quest for ‘more strudel!’. Therefore I let your imaginations run WILD on the amount of argy-bargy is let loose in Vienna near Christmas time. Elbows are used WITHOUT RESTRAINT. The interesting thing about the Viennese is that they do all the pushing and shoving (and sometimes even more!) of your average Brit, but they manage to do it without the infuriated scowl commonly seen in Britain. During my time in Amstetten I have often been pushed out of the way by a local, and when I have turned to give them a good dose of the ‘Silloth Stare’ (a particularly vicious facial expression I inherited from my grandmother and use on occasions of angst), I am more often than not surprised to discover the Austrian looking calm and serene, and sometimes even vaguely cheerful! What I would call ‘pushing’, they simply refer to as ‘walking’! Anyway, Helena got a bit agitated by the gung-ho attitudes of the Viennese, and so as we were waiting to board the underground train she took it upon herself to teach them a lesson, by leading a kind of stampede into the carriage as soon as the door opened. The surrounding Austrians enthusiastically joined in, but those inside the carriage were less than pleased, and one responded by giving Helena a good whack on the arm. Helena said this gave her a dead arm, and she was still hurting over two hours later (which was ironic, as I was still laughing about it then!). As we were catching the train I remarked to Helena how confusing the names of the stops were.
“Ottakring and Simmering sound very similar, don’t they?” I quipped. “Where would you rather live?”
Helena stonily replied “London.” 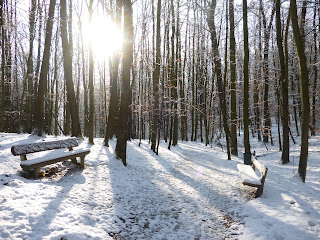 The morning after Helena arrived there was a CHRISTMAS MIRACLE and Amstetten was draped in a blanket of wonderful fresh snow. The snow is still there, and has managed to nearly kill me several times as I slip and slide my way to school, wildly grabbing tree branches and passers-by to stop myself from falling on my arse. This almost happened twice yesterday as I trudged to the local shopping centre to try and do some more Christmas shopping. I had made the perilous decision to wear my heeled boots, as they come higher up to my knee and the snow really is more than a foot deep in some places! However the heels didn’t have as much grip as I’d anticipated so I made very slow progress. I arrived wet, windswept and bedraggled, and after sweating CONSIDERABLY I had to strip off several layers of outewear in order to cope with the amount of central heating they were pumping into the shops. I continued to become VERY STRESSED as I couldn’t find anything that I’d written down to buy, and naturally I bumped into about half of my students who were looking cheerful, calm and filled with the joys of youth. They smiled at me pityingly and asked if I was okay.

I’ll leave you with a picture of the Krampus, which happened last weekend. For those of you who don’t know, the Krampus refers to an eight-foot-high monster which runs wild through the streets of Austrian towns near the 5th December. He holds in his hand a whip made of twigs, with which he is meant to attack the ‘naughty’ children. In fact he attacks all who come in his path, regardless of their previous behaviour. Some children (and adults) find this fun, and playfully run in front of the Krampus until they get a sharp flick on the rump. Others start to cry, and run away screaming, or try and hide behind the legs of their parents. Each Krampus has two huge brass bells on their bottom, and sporadically they will jump up and down to make the bells clang. Every time I heard this I was inexplicably filled with SHEER TERROR! Some of the Krampuses had baskets on their backs where they could collect naughty children to take back to hell. One of these baskets had an ACTUAL child in! My landlady told me that when her daughter was little she would come home with feet that were red raw from all the whipping, and a teacher friend said she used to be so afraid to go out on Krampus night that her father used to accompany her to and from school. All in all it was an extremely weird evening, but the weirdest thing about was that whenever I remarked to a local that I thought it was strange they looked at me with confusion and disbelief. 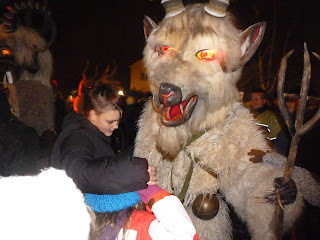 Well I'll be home in ten days and I can't wait to see all my family and all the cute little faces of my darling friends! There are some stories that are just far too cheeky to post online, which means that I can use them as small talk when I see you all!!! SCORE!!! <3
xox