I was back in Melk today. I do like Melk, but am really unconvinced by the concept of ‘commuting’ anywhere and it was very difficult to get out of my warm (SINGLE) bed into the freezing cold ice igloo that is my flat this morning. However, today the cleaner came and two brilliant things happened. Firstly, I thought the cleaner cost fifty euros, but she only costs twenty! She slaved away for over two hours, did my washing up, hovered, changed my bedding AND (second brilliant thing) showed me how to use the heating! So now I am sitting in only one jumper, luxuriously enjoying the benefits of a central heating system which, like everything else in this building, has not been updated since the height of the cold war. (<<<<<<<Ironic! :P)

For the past three weeks, Amstetten has been going chicken oriental for what I was reliably informed was one of THE social events of the season – the HLW Ball. My students (who organised the ball) told me it was the BEST ball in Amstetten, Austria and maybe even the world. When I asked them if they ever went to other balls, they were nearly sick into their vocab books, so disgusting the idea seemed to them.

The idea of the ball had been stressing me out, mainly because I was not only going without a date (perfectly normal for me as I am in INDEPENDENT WOMAN), I had to go to this one without anyone. Neither friend nor foe were prepared to accompany me, meaning I was waddling to the venue (late) on Saturday evening completely alone, trying to blend into a vast crowd of Austrians streaming towards the door :'( I had, however, received help in getting READY for the ball. Last weekend I went to Innsbruck and received lots of fashion advice from my friends there, and bought a dress. When I showed the dress to my landlady she got very excited, and gave me seven different shawls to wear with it. Going from personal experience, I thought a shawl would be a bit showy and I’d be unlikely to see anybody else in one there. I nearly didn't wear it. Thank god I did. These people take their balls seriously – the lovely woman I was seated by was wearing a full length, bejewelled dress with a silk shawl and an up-do. It was beyond posh.

Anyway, I plopped myself down by these strangers and tried to do some small talk in German, which mainly involved me repeating strange German words I didn’t understand whilst wearing a confused face:

Smiling and agreeing generally seems to either answer the question, or encourage them to stop trying.

The event was attended by about 1500 people – students, parents, teachers, friends and locals. It opened with a performance of the female students either dancing with their boyfriends or their fathers. They danced to ‘You Raise Me Up’ by Westlife, and at the appropriate moment, the fathers lifted their daughters into the air and looked solemn. Regular fans will not be surprised to hear I was choking back tears at this point: totes emotes. 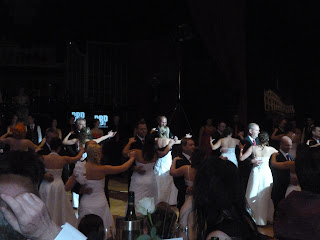 I was sat by a student from Vienna who was unfortunate enough to ask me a question JUST  as the big band started playing Dolly Parton and Kenny Rogers’ “Islands in the Stream”, and I started hyperventilating with excitement. Obviously sensing a chance of romance, he offered to dance with me. I’ve always believed myself to be a very good dancer, possessing natural rhythm and grace. However, after stepping on his feet about 17 times we had to stop and it was very awkward.

There were five or six bars – one for ‘beer’ (it’s lager.), one for Champagne, one for cocktails, one for shots etc etc. I went to them all. Near the ‘beer’ bar, in the room for the hip young things, some of my students performed in a band and people cheered and drank mugs of beer (me too!). Some of them came and shouted at me things like “IT MUST BE SO WEIRD FOR YOU TO SEE PEOPLE DRUNK WHO ARENT 21!!!” (wrong) and “YOU CAME WITH YOUR BOYFRIEND!” (also wrong.) One student told me that she LOVES my lessons. She is my new favourite.

At midnight there was another huge performance which included the headmaster dressed as some kind of prince and many dance routines:

When it ended, everyone was weeping and cheering and they did a little encore. After two more glasses of wine, the headmaster invited me to come and drink with the VIPs (it was only made apparent to me later on that they were VIPs). By this time I’d had a vicious cocktail of alcohol, and was feeling emotional, enthusiastic and over-excited. I simply GUSHED about the headmaster’s performance and how wonderful it was to get all the students involved, then started prattling away to the local important business man who had sponsored the event. Yes, in hindsight, I am embarrassed about this; however, I have no regrets.

Here is a photo of that I took of myself in the disabled toilet. At the time, I thought it looked really wacky and cool and like I was eating my own camera. I think you’ll agree!

After the solo photoshoot in the toilet, I felt a bit peckish, so snacked on some salmon and caviare entrees (tasted fishy...in both senses of the word!!!) then decided to waddle back home. I got back at 3am, and in the morning Little Old Landlady was appalled. “3am!?” she cried. “They usually don’t get back until at least seven!”

It was a pretty exciting night, but I’m even more excited for this weekend, as one of my fellow TA friends thinks she’ll be able to acquire me a ticket to attend her ball and this will mean I won’t be going alone! And, because it’s in a different town, I can wear the exact same outfit. SCORE!!!!!!!!!! :P