As the days go by I am becoming increasingly aware of how thin the walls in my accommodation are, and therefore how intimate this whole living situation is. We are in a traditional Spanish style house, built around a very pretty central patio, that has been divided into flats. About six flats all face onto the small patio. As I type I am being serenaded by the sound of a toddler WAILING 'MAMAAAAA MAMAAAA'. He's been doing this for about fifteen minutes to no avail, so god knows where Mama is but my guess is she ain't coming any time soon. When I first moved in I was creeping around trying not to disturb anyone, but I know the point of living in Spain is to fit in and adapt to their style of life, so I've been tap dancing up and down the stairs in my flip flops and dropping lots of heavy objects wherever possible. That's the type of behaviour that seems to be en vogue.

Yesterday we had our last Spanish lesson. The Spanish lessons have been fun because the teacher is a sweetie pie, but they have been gloriously uninformative. Over the past 16 hours of lessons I have learnt one new swear word and how to say 'what's up, man?' in Andalucian slang (Que pasa illo?). They are basic beginner's lessons so I already know the other stuff, which in one way is great because this is the first time I've been top of the class since I won the 100m race in my PE group in 2007. Its the first time I've been top of a Spanish class ever! Everyone thinks I'm really good at Spanish here, its nice because so far there's been nobody to compare me too so I've been lapping up the compliments as I've been necking my sangria. Unfortunately we are now starting to make friends with other Leonardo students who studied Spanish at university as well. I'm very wary of this, soon it will become glaringly apparent that the only vocab I can remember is the words that sound like English words and I don't actually know how to use the past subjunctive and it will be like totally #awks!!!

Anyway I've heard its pretty cold and miserable in the UK and in Austria its SNOWING!!! I'm sure everybody at home is worried about the welfare of myself and the rest of the group so you'll be relieved to know its still hitting 30 degrees most days. Spanish architecture is designed to block out the sun with narrow streets and shutters on the windows. This obviously goes against everything British people believe, so we've been searching for somewhere where we can sunbathe, and thankfully we came up trumps with a cute little hostel that has a 'pool' (read: bathtub) on the top and sells iced tea and hot dogs. We've spent the last couple of days up there sunbathing and strutting around feeling fabulous. I wouldn't say I'm a bronze goddess quite yet but I do think I have twice the amount of freckled than I did two days ago so I suppose that's an achievement of sorts. 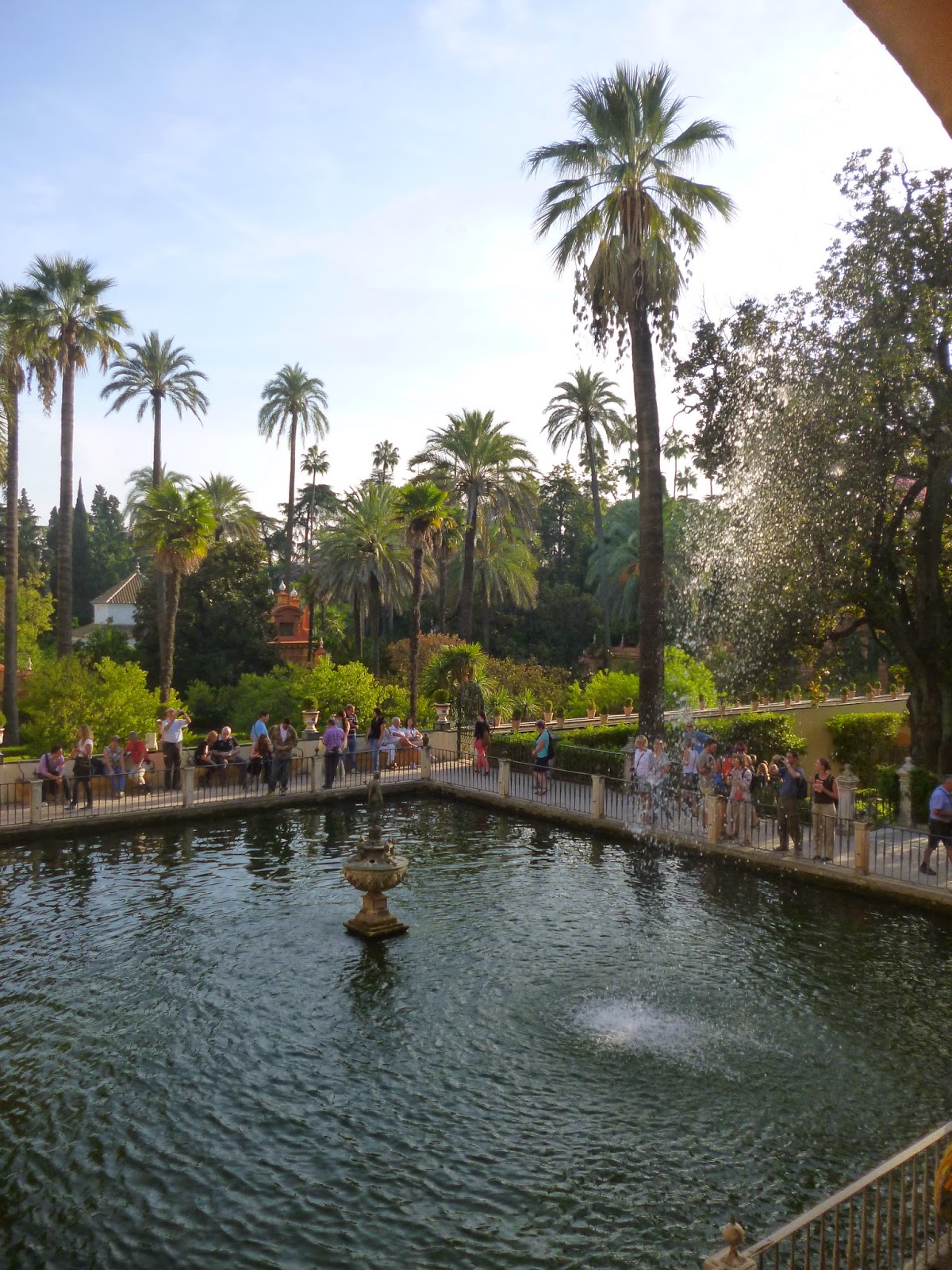 Yesterday, after our lesson, we went to visit the Alcazar which is free after 4pm on Mondays. We casually rocked up at 3.30 and joined the queue without realising this, and after about 15 minutes looked back to see the queue had extended about 100m behind us. This made us smug so we bought ice creams. The Alcazar is incredible, its a moorish palace and its absolutely mad! Its a great place to pretend to be a princess. Its the oldest palace in Europe that's still in use, because when the Spanish royal family visit Seville they stay upstairs. Not only that, but there is a corral there where the playwright Lope de Vega and his contemporaries used to have their plays performed!!! He's who I wrote my dissertation on, so when I found I just about died with excitement and jumped up and down.

That's all for now folks.

Tune in some time soon to find out.... wtf is my work placement? AS WELL AS MORE FUN COMMENTARY!!!!!!!! Xxxxxxxxxxxxx