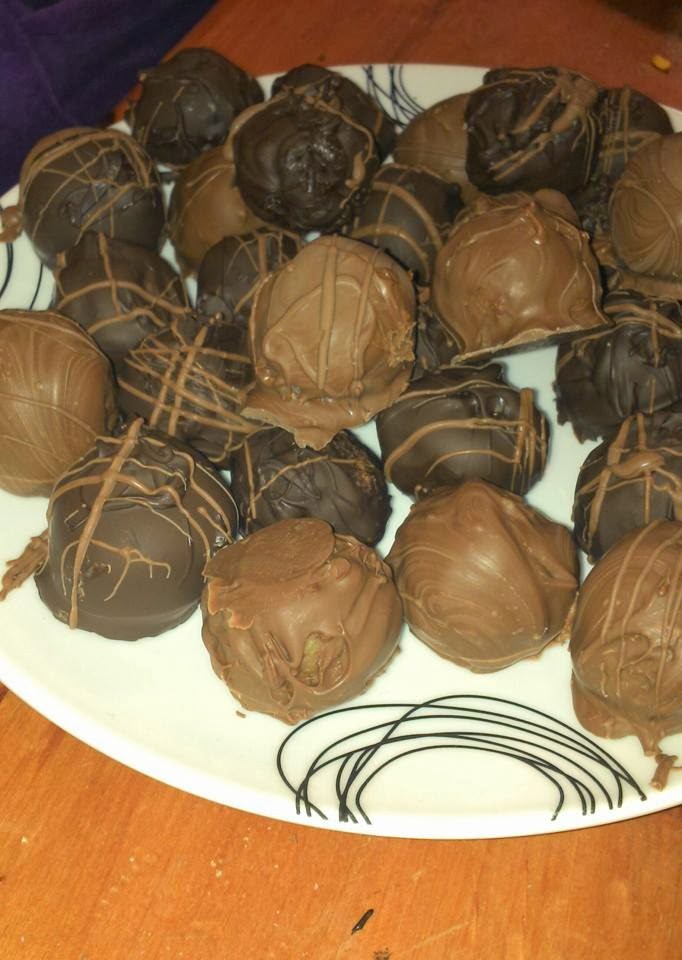 I went down to Birmingham last week to visit a Birthday Boy. I'd asked what his favourite cake was and he told me it was "Banoffee Pie", which isn't a cake and is impossible to transport on the train, so I decided to make my first ever cake balls/pops (appaz they're not pops if they're not on sticks). Cake balls are made by mixing cake with cream cheese then rolling into balls and dipping in chocolate. It all sounds a bit overwhelming but the actual process wasn't too bad, especially as my housemate is a resident cake popxpert and held my hand throughout.
To try and capture the flavour of banoffee pie I mixed a basic banana bread with toffee sauce, then dipped in chocolate. The tofffee sauce doesn't actually come through though, if I tried again I would make a non-spiced banana cake (no cinnamon) and maybe add toffee to the mixture OR you could make a toffee cake and mix it with banana cream cheese frosting. Either way, the result was still delicious. I surprised myself that I much preferred the milk chocolate versions than the dark ones.
The best thing about them is that it means you can keep saying "Do you want to eat a banana ball?"

I used the banana bread recipe from The Hummingbird Bakery cookbook (reviewed and typed out HERE). I like the recipe, I used a cake tin instead of a loaf and it turned out fine, thought the edges did burn a bit. Its a weird recipe because of the order you mix things together but it worked and rose well.
There's also a really good banana bread recipe on The Guardian, which I made in Austria, BUT you don't really want a very moist cake for the process.

Once its baked, crumble the cake into a bowl (I included the 'crust' of the cake but some recipes say you should cut it off) and mix with toffee sauce and cream cheese until it sticks together and forms balls. I used about half a bottle of toffee sauce (the type you put on ice cream) and one or two spoonfuls of cream cheese.

Put them in the fridge for a couple of hours (I left them there overnight).

Melt the chocolate in the microwave in a shallow bowl. The best chocolate to use is one that goes very runny. Melt it gradually on a low heat setting, stirring it every 10-20 seconds to make sure it doesn't burn. Use a fork to dip the ball into the chocolate then rest them on a chopping board covered in cling film. They dry very quickly.

I put some excess chocolate in a sandwich bag, snipped the corner off and did some funky little stripes on the balls, a la The Great British Bake Off.

Drying them on the board means you get a flat side, but that makes it even easier to transport. I took them with me in a big tupperware box and they've stayed good for a week. If you have any questions or feedback please leave a comment and I'll reply :)

This recipe was brought to you courtesy of BLOLLINGS PRODUCTIONS xxxxxxxxxxxxx