Here in Austria I’m working at two schools .The first, which is the school who have to deal with all my paperwork and mood swings, is in Amstetten and is a school focussed on hospitality. The second is a grammar school which is situated in Austria’s version of Disneyland (Melk). A huge abbey built on the top of a hill in Melk, Stift Melk is so big that it is literally impossible to get a complete photograph of it without a helicopter. After leaving my house at 6.40AM (!!!!) I travel to Melk on a 33 minute train ride. The train line follows the river Donau, which had lots of mist rolling over it in the mornings, and the water was quite calm last week and a beautiful colour. Being a relatively ‘flat’ part of Austria, you get a wonderful view of the sunrise and then you turn a corner and the Abbey suddenly appears out of the mist, huge and symbolically intimidating, like the ice berg in Titanic (except yellow). As commutes go, it’s quite impressive, and certainly makes the early mornings almost bearable (I also like to play ’21 seconds’ by So Solid Crew to get myself going).

I liked it a lot, and the town is also very lovely with little, traditional buildings and a market on a Wednesday. One of the coolest things about the school is that it has huge oak doors in the corridors which open automatically, like magic! One of the least cool things about the school is that you have to climb about 935,000 steps to get to it, and by the time I get to the top, I’m really out of puff!!!!

Seeing as I am now working in Disneyland, I decided I needed to complete the look so, despite refusing to spend money on a coat (who needs a coat!? in Austria!?) I bit the bullet and [BIG NEWS!!!] bought myself a Dirndl. I got it in an incredible shop where I wanted to buy everything. Austrian traditional dress seems to involve a lot of velvet, reindeer and buckles: my three favourite things! Mine was reduced from 200 euros to 39.99. It's a lilac colour to match the lilac tree that was planted in my honour in Wolverhampton (by my parents in my garden) and has little reindeers leaping all over the skirt. A dirndl is made up of the dress, a little blouse and an apron. You can also get AMAZING VELVET JACKETS but I couldn't afford one, so it's on my 'wishlist', along with a pair of ruby slippers and comprehension of the German language.

They were all full length. I might take it up to knee-length, if I'm feeling paticularly cheeky.
When the hell are you going to wear a Dirndl!?!? I hear you cry in indignation. Why, around the house, when I'm feeling sad.

My Snow White-inspired lifestyle has NOT ended there! After accumulating some rather ripe bananas I decided to release my inner Mary Berry and, instead of throwing them away, made a cheeky Banana Bread. Naturally, this activity took me an entire day to complete and involved spending much more money than the bananas were worth. Baking ingredients in Austria is not the same as baking ingredients in the UK (I blame there extensive variety of baked goods). I had to resort to accosting random strangers in the supermarket for advice, especially in the flour section, where I was really baffled. One day I'll look up the German words for the ingredients I want BEFORE I go to the supermarket, but not this week.  (EDIT: BTW See my recipe for banana bread cake balls here). 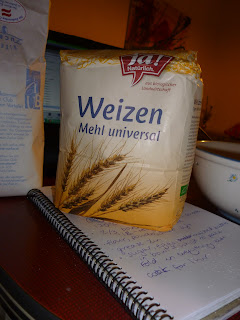 I used the  Guardian's perfect banana bread recipe  and it the best banana bread I've ever eaten (sorry dad.)
Whilst making my banana bread I utilised some of the wacky 70's equipment in my kitchen, including this weighing scale: 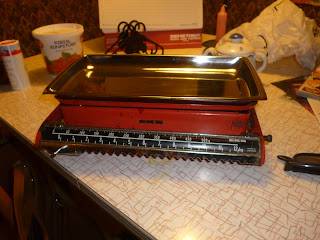 It really is a weighing scale, and it seemed to work, but I've never seen anything like it. Exciting new things!

And IN CONCLUSION here are some pix I took of Melk!