Important legal disclaimer: I am NOT affiliated with London 2012

Working in London for these past few weeks has meant that, whilst listening to my generic mp3 player on the 'tube', I have realised that I cannot relate to some very important lyrics by two of my favourite artists.

1. Dolly Parton.
I am not 'Working 9 to 5', today I worked '9 to 9', that's four hours longer than Dolly. Why does Dolly have such short hours? I thought being a global megastar was more time consuming and also more of an evening and weekends commitment.

Actually despite being overly tired I personally declare London 2012 a SUCCESS! The beginning of the Olympic period was a stressful time for me - I went to dark place, got extremely tipsy during the opening cermony and tweeted TOO MUCH and TOO ENTHUSIASTICALLY and with TOO MANY CAPITAL LETTERS and TOO MANY EXCLAMATION MARKS!!!!! But since then things have really started to look up. I got a free mascara, am staying in a dear friends house (because she's not here it feels like squatting) and scored some event tickets (oh yeahhhh connectionssss i'm so connecteddd). So I've been really lucky and managed to go to a couple of events, and explore inside the Olympic Park.

A lot of people have said that the Olympic Park is great, because it's actually like a park (!!!!!). This is misleading if you've ever been to West Park, or Bantock Park, or Platt Fields Park (etc), because unlike those parks, this park is basically a wide expanse of tarmac for crazed foregienrs to trudge along, and also a colossal, hideous, red transformer-monster-thing parked in the middle. NOTE: Everyone thinks you're clever if you know it was designer my Anish Kapoor. Nobody thinks he's very clever though, because the weird scaffolding-mesh-tower is as ugly as it is big. And that comes from somebody who really tries to like modern art, especially when other people don't like it (indie!!!!!!!!!!!!!!!) 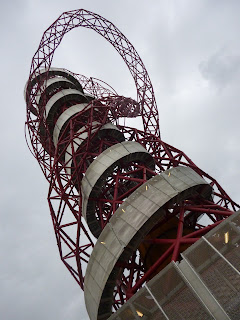 Also your visit to the park will be cast in doubt and suspicion if you have googled 'illuminati olympics' beforehand and especially if you've watched this completely bizare video (make sure the sound is on or you don't get the full, terrifying effect)
http://www.youtube.com/watch?feature=endscreen&NR=1&v=EBjxoyxWdOU

Anyway the Olympic park was actually really fun, at one point me and my companion (WHO SHALL REMAIN NAMELESS for legal reasons!) (it was definitely a celebrity.) were approached by a small, starved-looking german boy begging us in rasping, terrified tones for some tickets to the hockey. Just goes to show the affect the Olympics have on people - they go completely craycray.

If I am brutally honest I think big city life and weird Olympic fever combined with hot weather and the mind-boggling other-world-ness of the 'tube' has sent me a bit cray cray too! a bit chicked oriental! apples and pears! past me the hammer and bone! staff pout coward! (lol??) but it's all part of the experience. I've stopped crying at babies (did cry at an article about the equestrian riders' connections with their horses, but I think that's definitely valid) and today I finally filled up my Leon loyalty card! And to be honest that's all that matters.