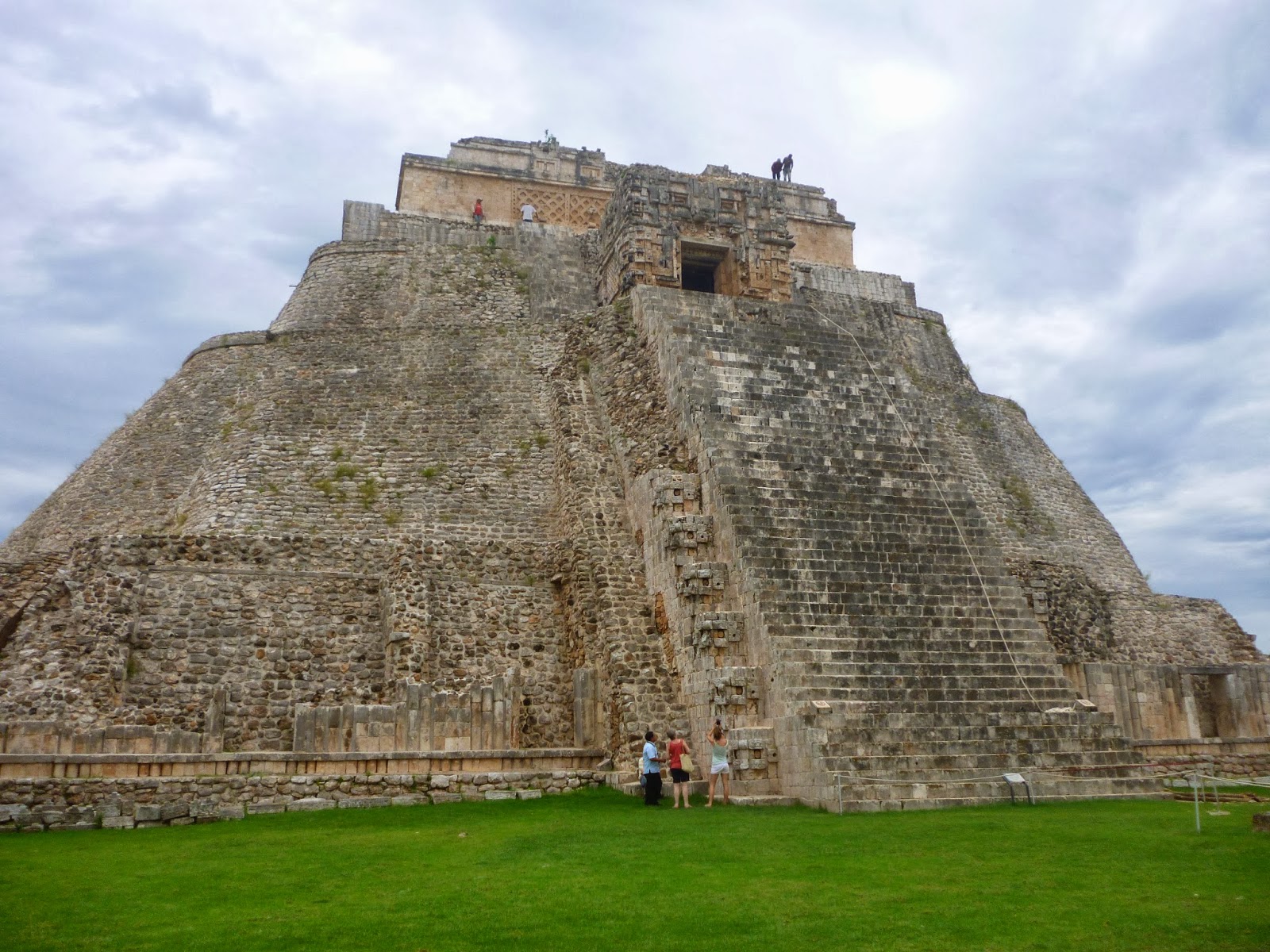 Regular fans who are concerned about my lack of friends will be glad to hear that I have given up trying to make NEW friends....After almost a week of being of riding solo, I have met up with an "OLD FRIEND" (Fran) (who I know from Cuba) and her unsuspecting brother. Old friends are easier to have around than new friends. Together we took on the ruins of UXMAL and A CHOCOLATE MUSEUM. Uxmal had an added bonus feature that we were allowed to climb the ruins, unlike at Chichen Itza where I visited two days ago.

I went to Chichen Itza from Valladolid which is a snazzy little colonial city that has a free "tequila tour" (read: somebody lets you look at a tequila plant then drink some tequila then tries to sell you tequila) as well as a free "chocolate tour" (read: somebody lets you look at a cocoa plany then eat some chocolate then tries to sell you chocolate). Chichen is like the mega-resort of ruins and was full of market traders who kept calling me "princess", which I found patronisin, but I forgave them due to the language barrier. It has a giant pyramid that is Very Cool and also was full of large-winged butterflies that dances around my ankles and fortified my spirit.

I´m now in Merida, and yesterday I went shopping and bought a really funky sports bag to keep my clothes in as I was finding it stressful stuffing all my great fashion looks into my tiny backpack. Then today we went on our Great Mayan Adventure. Our tour guide had an odd quirk where half way through a sentence he would pause for a while, and stare at you, and you´d think "is he dying?", but then he´d laboriously finish what he was saying. He led us to the top of a big old pyramid. OLD FRIEND (Fran) nearly had a breakdown because it was so vertigo-inducing. I didn´t blame her, and felt a bit wobbly myself, but managed to cover it up and retain my Bad Gal persona.

The chocolate museum was GREAT because as an added treat the enacted a traditional Myan shaman ritual using conch shells as horns. Several shamans hid under an alter and pretended to be frogs, then they played some rhytmic music on big drums, and THEN (best bit) they led us in a procession past a family of SPIDER MONKEYS!!! The spider monkeys were the highlight of my day, which is proved by the 1 gazillion blurred and out-of-focus photos I now have of them on my hand held portable digital camera.

We are now prepping for a Big Overnight Bus Journey to Palenque, where we will be sleeping in the jungle! I´m not as excited by this as you´d expect, because the jungle is full of creepy crawlies that will try and bite me. However, apparently there are some beautiful waterfalls and some of the best ruins in the area (according to Felipe, the friendly New Mexican I met at customs on the way into Mexico), so I guess I´ll struggle through. Until then we´re just chilling by the hostel pool on our hammocks. Yeahhhh buddy!
xxxxxx