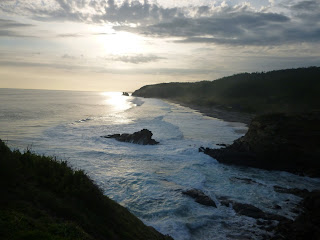 Introduction: This week i made it to the Pacific coast, where I was able to sit on a clifftop and try to spot Pi floating towards the Mexican shore. I stayed in hostel Nagual in Masunte, which is near Puerto Escondido. I spent quite a few days on the beach which was VERY beautiful and i thought about how ive been quite lucky in living in and visiting some extremely beautiful places this year: Vienna, Salzburg, basically everywhere in Cuba except for our house/bunker in Havana, and now Mexico. I will now detail my Pacific Ocean Adventure!!! (Quite similar to Pi´s own sea-faring escapade)

NB: I have decided to write this post in the third person, so as not to ruin the surprise that I did not actually die at the end of this story.

Sarah´s middle name is Rose, which accurately represents how she is both extremely beautiful, like a rose flower, but also bad ass and spiky, like a rose bush thorn. Mazunte beach is a bit like this, and it is here that Sarah experienced a CLOSE SHAVE WITH DEATH. Puerto escondido is famous for being a surfers paradise which is why she steered well clear of there. Mazunte itself is still quite wavy, and after three days of paddling and contemplating the waves, Sarah was eventually tempted into the sea by her Dear Friend Fran.

Fran went and frolicked like a little water babe, then ran out with tales of joy and adventure. "You have to go in!" she gurgled. Comforted by the fact Fran's brother Adam was still Living the Dream in the waves, and the fact Fran said "they´re definitely not as big as they look", Sarah cautiously advanced. A moment of calm water quelled her initial nerves and she boldly strode out to where the other beach goers were playing in the waves.

A couple of rambunctious little tides bobbed her about and she got a bit wet and her hair got all scruffy. Then the waves got a bit bigger. Despite being unaccustomed to this kind of activity, Sarah was enjoying trying to jump over the height of the wave without getting salt in her eyes. Adam was having the time of his life. Whenever a wave came, he would dive right under it, like a dolphin, and come out the other side looking cheerful. "You have to dive the next one!" he hollered amicably, presumably unaware Sarah doesn't know how to dive like a dolphin.The wave hit, and instead of diving Sarah only managed to kind of scramble and twist, and cough a bit, and suddenly the force of the water threw her down right underneath the surface....... (DRAMATIC PAUSE!!!)

She span round in the water and tried to find air again, but only found her hands scraping against the seabed. Expecting that once the wave had passed, she would again reach the surface, she waited a moment and scrambled a bit. But while she was still under another wave hit and pushed her down again. At this point she didn't know what was going to happen because she didn't know which way the air was, and if shed be strong enough to even make it to the surface of the water if she were to work out which way to swim. So she started to blow air from her nose to stop her from breathing in more water. She was quite scared. She realised that her bikini top had fallen off, but thankfully found it was just chilling out around her waist. In hindsight the fact she took the time to "check herself before she wrecked herself" is proof that she is either has stupidly twisted priorities or she wasn't actually that scared for her life. Anyway, she scrambled a bit and then the waves receded and she broke the surface. Ducking down to her shoulders again, she pulled her bikini back on, and then another wave came thundering over. "Look, here comes another big one!" squeeled Adam. Sarah regarded the oncoming wall of water with a grimace that she hoped with give all fellow swimmers the impression she was enjoying herself.

As soon as it was possible, she began staggering back to Fran, who was sitting on the beach PISSING HERSELF LAUGHING, clearly completely unaware of how close our hero (me) had come to death. "You were under for a really long time!" she pointed out. "That was not for me," Sarah managed to reply, stoically, and spent the next two hours projecting sea water out of her nose.

I stayed in Mazunte longer than I meant to, because I was having such a BLAST! It really is beautiful, and the hostel was very friendly and cheap, though the rooms were full of these massive ants that were bigger than your thumbnail. GROSS! The absolute best thing about Mazunte is that every couple of hours some young hero would come round with a huge basket filled with The Best Pan aux Chocolates in The World, freshly baked at a local restaurant (Le Sirena Vieja), and I would buy several and eat their delicious, chocolaty innards with delight!

Fran was there for my last night. Once she realised I had got to know basically every member of the village, she looked at me sternly over her omlette and said "Leave. Now." So I did! I took a stomach-churningly twisty road to Oaxaca, in what was one of the worst minibus journeys of my life, and will be heading off once again to visit one more beach before I head to Mexico City and homeee
WINNER WINNER CHICKEN DINNER
xxxx 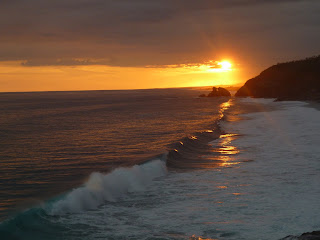