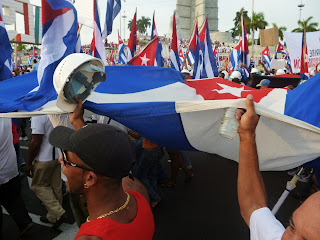 Today is a hugely important day in Cuba because it is MAY DAY, DAY OF THE WORKERS!!!! Obviously workers are a big deal in this Socialist State, however confusingly they celebrate day of the workers by giving everyone the day off work (!!??!?!?). People have been preparing for the celebrations all week, and lots of shops and businesses etc etc have put up signs declaring their support for ‘primer de mayo’ followed by the popular slogan “TODOS A LA PLAZA”, which my dictionary reliably informs me means “Everyone to the town square!”.

Being an easily influenced sort of girl, I followed these enthusiastic instructions and Calle B and I set off at a bone-tingly early 7.10am (it was meant to be 7.00am but SOMEBODY was late) (that ‘somebody’ was me.) Off we marched!!!! Fortunately for us we live a small walking distance to La Plaza de la Revolucion, but others had travelled from far and wide to attend and I was woken 4am by a rather irate Bajan housemate exclaiming “CHEESE ON BREAD!!!” at revelers outside our window. At 5.45am I was again roused from a dream-riddled snooze by some eery, spage-age techno music echoing through the streets and lots of whooping from Cubans who had arrived early and were getting excited. People came in their work uniforms with big banners and papier mache models of Fidel and also crocodiles (relevance of which remains elusive to me) declaring their support for the revolution. Although it was still very early, a huge parade of workers was marching proudly alone, and we snuck round the people watching the march and GOT INVOLVED! Unfortunately I didn’t have a 10 foot flag, a “Viva la revolucion!” banner or a red t shirt that said “#yosoychavez” on the back, so I didn’t look like many of the other people there, but I did have an enthusiastic and revolutionary attitude which I believe my fellow marchers appreciated a lot. 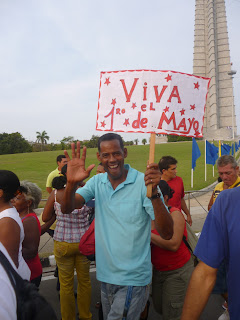 At one point the march came to a stop. Our group had got a bit split up and I was left with Bajan roommate and a certain J McGuigan, who is yet to make a name for herself in Manchester but has a strong fan base in Nottingham who call themselves the ‘McGuiglets’. We heard one or two words from an old man who I have convinced myself was Raul and/or Fidel, then they played the national anthem and chanted “Viva la revolucion! Viva Fidel! Viva Raul!” and everyone waved their flags like CRAZY! This seemed to really enthuse the crowd, as the march took up quite a pace after that and people positively stormed passed the memorial of Jose Marti, which lies at the centre of the Plaza de la Revolucion. In fact, they were moving so fast that it was very difficult for me, Bajan housemate and McGuigan to manoeuvre ourselves to get in a good position to see the people on the podium. Thankfully, through some extremely skilled side-stepping, we did manage to get to the podium-side of the forceful river of people, and only trod on one or two or three people/children on the way, and THAT’S when I managed to get my top notch photo of Raul HIMSELF!!! Admittedly, at that exact moment in time, I can’t say that I was 100% certain which of the several men on the podium was Raul, or if he was even there at all. Rumours were flying left right and centre about whether he was in green, pink or white, so I took photos of all the men and on returning home we singled him out. He (Raul) was looking pretty happy and waving cheerfully at all the workers. Standing below there were also some representatives from all over the world of people who solodaridise with Cuba. Today was dedicated to Hugo frickin Chavez who is continuing to remain very popular with the poplace. 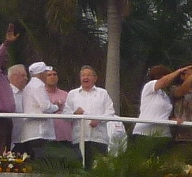 We not only got in touch with our patriotic, socialist roots this week, but also got one on one with nature on Saturday, as we went for a cheeky trip to Las Terrazas. Las Terrazes in an eco-community that is a day-trip away from Havana. At first our plans were nearly foiled as the bus there was full and we couldn’t find any six-seater taxis, which made the whole thing incredible economically unviable. However, by a stroke of luck, we stumbled on a very shiny, red car owned by a nice man called Carlos who agreed to drive us there for a very reasonable price. Once we got to the eco-community it became clear it was an incredibly large kind of place, but luckily Carlos drove us around the little roads so we could get where we wanted. You’d think riding around in a taxi inside an eco-community would be frowned upon, but it wasn’t. We went swimming in some natural pools. Everything was very GREEN and disconcertingly slimy, especially in the pool. Regular fans will no doubt be impressed, amazed and proud to hear I actually jumped into the pool from a nearby rock (more slipped than jumped, really, but the point remains). Hashtag overcoming my fear of water 2k13! Of the evening we returned to our New Favourite Club, El Morro in the fort, but I decided not to make a repeat performance of my Rapping, as – and i’ll admit this without any shame or embarrassment – i was a bit nervous it was a one-off thing and I wouldn’t be able to repeat my roaring success. However, on Monday I was introduced to a group of hip-hoppers from the US of A as ‘the rapper’, and joined in their hiphop bodypopping dancing style (lots of twisty-wrist going down), so you’ll be no doubt glad to hear that I am continuing to represent the UK hip hop scene here, “across the pond (and south a bit)”.

I’ll end on some sobering news. The more sensitive souls among you might be troubled to hear that both my laptop and my mp3 player have come into contact with a serious amount of liquid this week, and neither seem to have come off too well from the meeting. Both have failed to respond well to my fiddling with them, despite gentle coaxing and frustrated bursts of anger. Additionally, the laptop has acquired a vaguely unpleasant smell of gone-off-chocolate-milk. Thankfully Bajan roommate keeps leaving her laptop unattended and, through some serious sleuthing, I know her password and so have been hacking it.