This weekend I went on an AdVenTuRe!!!! Me and a couple of my new mates (yeah boy, I made friends, just sayin) went to CORDOBA! We went to CORDOBA to see the old mosque there that has been converted into a Cathedral. Its a very difficult sort of building to describe, but its interesting and weird, so obviously I liked it. Its a massive room filled with pillars in white and red, and there are Arabic mosaics and other features that used to be part of the mosque preserved around the outside. And then in the centre is the most outlandish church you've ever seen (with the exception of Melk). It was trippy. On the one hand it was like a major clash of two opposing cultures, and then on the other they kind of blended together seamlessly and it was beautiful. But weird. 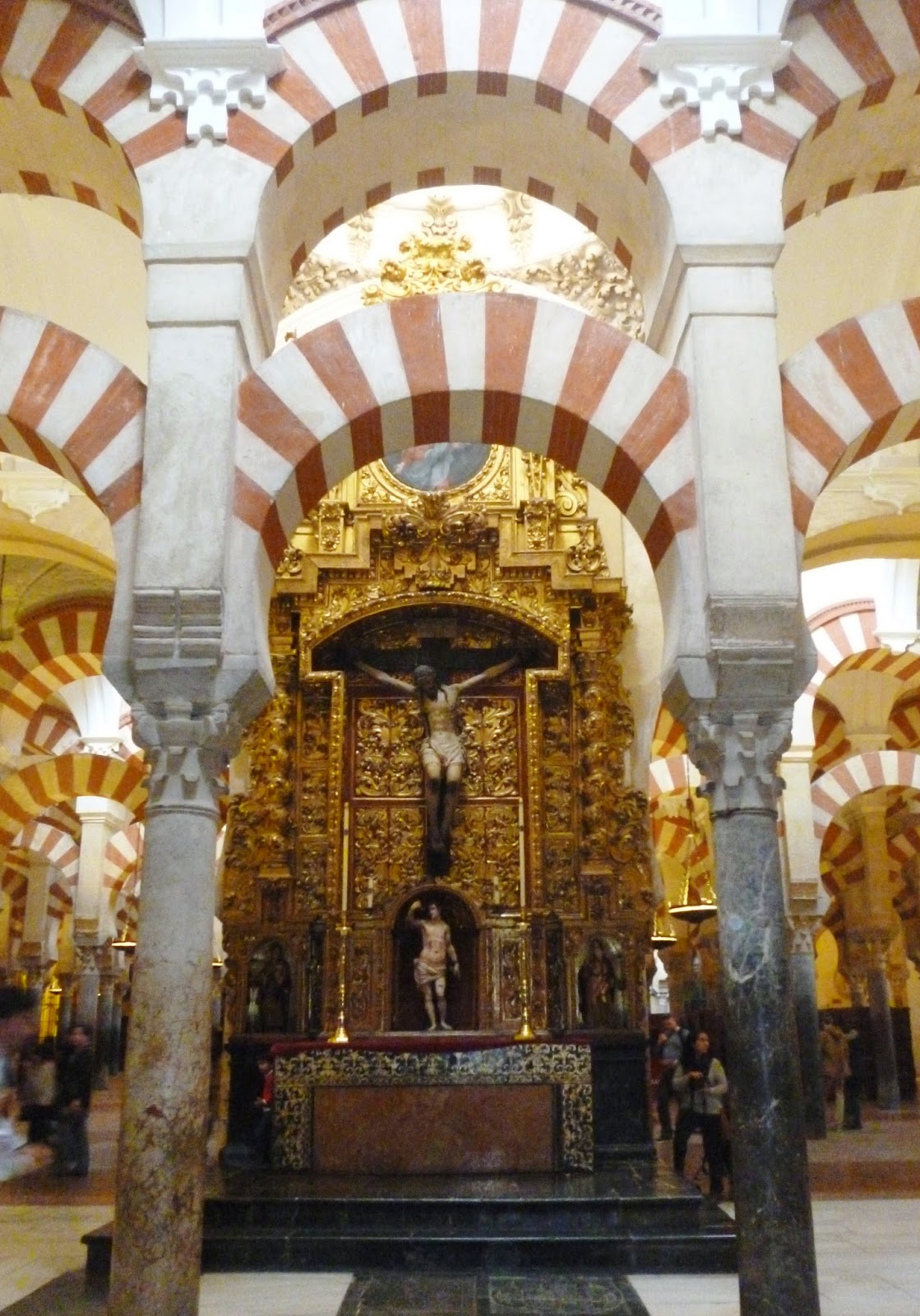 Before we arrived at the Mezquita we visited the ancient Roman bridge and took some touristic snaps. A small man came up to me and asked me to take a picture of him. I said yes because I'm a generous person who likes to give back to society. He asked me my name and told me his, but I immediately forgot it because I find it hard to remember names and I thought, "What's the point of making the effort of learning this guy's name? In a couple of seconds I'll have taken his picture and got on with my life!". HOW WRONG WAS I!? While my real mates, B and F, carried on admiring the view, my new little friend beckoned me down the path away from the bridge. I thought this was weird but followed him anyway as he had a massively expensive camera and I didn't think someone who was about to trust me with their fancy camera would be shady. As we carried on walking away from the bridge though I did start to feel a bit confused and became increasingly aware of my valuables. Luckily B and F decided to follow me so I knew I had back up. The little guy then started explaining to me what photo he wanted. It sounded pretty simple to me, and yet every time I tried to take the camera off him he was like, no, you're doing it wrong! I don't know how long this went on for but it was TOO LONG. Finally he let me take the picture and seemed pleased with it, and he offered to take ours. But by this time I'd decided he was crazy so politely declined and we said our goodbyes and left. Just as we'd got back to the bridge I heard a little voice shouting "Sarah! Sarah!" and he came running up behind us, waving the camera, and said "Will you take another one?" but F flatly refused. In her wise words, we were only in Cordoba for six hours...

You'll be excited to hear I've also made a Spanish friend! (She hasn't actually confirmed that we're friends yet, and we're not Facebook official, but I'm feeling optimistic). On Monday I went with her to her salsa class, which she PROMISED was beginner's standard. But when I got there, there was this stern lady on reception and she eyed me up and down and asked my friend (in a very cynical voice) "but can she actually DANCE?". I was mortified that my friend replied "oh yes!" with great enthusiasm, despite having no proof of this. We climbed the three flights of stairs to the lesson (which incidentally is held in the same place where Seville's Erasmus party happens and is the bar where they played Anaconda twice in one night....aka my favourite venue in Seville). I asked my friend how well exactly I was expected to dance, but she was having none of it and just grinned and said it would be fine. On the top floor a muscular, short man in a polo shirt welcomed me with the same question "But can you dance?". Seeing as I'd walked all the way up the stairs I thought, I may as well back myself, so nonchalantly said "yeah, a bit..." and he replied "a BIT? or a LOT? How long have you been dancing for exactly?" I felt a tinge of dread enter my heart. I told him that I had done a couple of salsa lessons in Cuba, and he scowled and said "that's Cuban salsa, this is LINEAR." I've never thought of myself as a particularly linear person, but I thought it was best to keep that to myself and went to stand at the BACK of the class.

We began the warm up, and within 90 seconds covered my complete knowledge of salsa dancing. Then we did a lot of wiggling and I wanted to giggle while I wiggled but tried to keep professional. When we started learning that week's new salsa step, my mouth hung open in shock. It was most certainly not for beginners. I was so busy watching the teacher with furious concentration that I didn't clock how good any of the other girls were. But we danced in partners and we had to swap partners very frequently, and the look of dread in each boy's eye as they saw me approach made me begin to think that I probably wasn't the best. In the end I think I actually did get the step and I only nearly fell over and had to be caught by my partner TWICE, so it was resounding success. I've signed up for a month!

I'm now sitting in the kitchen waiting for my chilli to cook, as I'm hosting the English group tonight (and we're eating chilli). I would like to end this post with a shout out to my dearly beloved sister who is hired by an actual school to teach children music. She sure educated me about music, here's a snippet from her music collection that really came in handy on Friday night when we were all watching amateur grime videos on youtube.