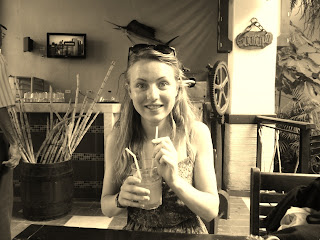 Here's a pick of me looking great with some traditional Cuba drink made from squashing sugar cane. I made it sepia and heavily edited it to make me look (even more) beautiful!!!!!!!!!!! (And to hide my ECZEMA EYESSSS!)

I know you must like to imagine me whilst I’m writing my award-winning blog posts, so let me set the scene. I’m sitting in my kitchen-diner, which looks like a bunker you’d build in case of atomic-attack because it’s made of breeze blocks and metal and the glass is blacked out. It’s so beautiful(!!!!) I’m listening to Eminem, because I’m STRESSED, due to an enforced-fried food, ants nest and broken glass juice jug related INCIDENT which we shall NOT dwell on. It’s been a busy couple of weeks so here’s a little compilation of what’s been gwarning! These entries are taken from my top secret diary, please keep all the very private info to yourselves!!!

26th March
Weather in Havana has been uncharacteristically tempestuous this week. Walking around in a skirt has become a bit bothersome because the breezy Havana wind keeps creeping up under my hem-line, like a pervert's spindly fingers, and lifting my skirt up. I think I have probably flashed at least half the population of Havana in the last two days alone. Walking to university was bad enough already. I tell you, if one more person tells me I need to go to the beach to get some more sun, I do not know what I’ll do. I’ve been here for almost two months, I have had a LOT of sun and I feel like being constantly referred to as “Blanca” by passers-by is really contradicting my claim that I have tanned. NB: I’m working on a politically charged, world-changing essay entitled Reasons I Don’t Like You Calling Me ‘Linda’ When I’m Walking To Uni And I’m Late And I’m Sweaty And Please Don’t Touch Me When I Ignore Your Whistling, and I’m going to send it to the Granma and the Guardian (to kick-start my journalism career!).

Many of you will be sick with worry about how I’ve been coping since the Scuba Dive. Well, three weeks P.S.D. (Post Scuba Dive), and the emotional scars associated with my Trauma Underwater have begun to fade. Nonetheless, my life has continued to be characteristically turbulent, obstacle-filled and blood-pressure increasing. Why!? I hear you cry. Well I shall not delay in telling you. It is due to the one issue most beloved, important and close to my heart. The one issue that can make or break my day, week, month or (in this case) semester abroad. The one issue that I should have realised would make happiness in Havana impossible…………………… [DRAMATIC PAUSE!!!!]

The issue is: FOOD!

Ana-Maria, our ever present, ever scowling ‘ama de la casa’, cleans and cooks for us. She brings us breakfast in the morning and dinner at night (brought in several thermal bowls that greatly resemble dog dishes) and frequently responds to anything I say to her by smiling at me witheringly, telling me she doesn’t understand a word I’ve said and asking Mercedes to explain what I mean. To begin with I thought she was very friendly but lately, our relationship has been on the rocks. Regular fans may recall The Great Breakfast Dilemma of March 2013. You’ll be intensely relieved to know that since telling our landlady I was constantly hungry because I couldn’t sustain myself on one bread roll and butter, breakfasts have been a lot better! Following this victory our attentions soon turned to the evening meal.

Things became particularly precarious last week. Ana-Maria enjoys frying food. She LOVES to fry, and she especially loves to fry croquetas. Croquetas are stumps of processed potato mixed with an unidentifiable meat (we assume it’s pork, but following the revelation that our spanish teacher occasionally eats horse meat and sees no problem with it, we’re not certain) and covered in breadcrumbs then (naturally) deep fat fried. Last week we had them at least four times in the week, and the other three days we had patties, which are basically the same concept but round and flat. We were getting most perturbed. I don’t mean to over-accentuate the point, but two months of rice was starting to bloat me. On the seventh day (of croquetas) we took leave of the establishment and went out for dinner. We contemplated sneaking, but instead walked boldly down the patio, croquetas and rice rolling to and fro in our wake. We had prawn salad for dinner.
The following day, after about two hours of stirring each other on with words of encouragement, we approached Ana-Maria. Mercedes elected herself to make the appropriate comments (due to the aforementioned fact she never has a bloody clue what I’m saying), and told Ana-Maria the vague white lie that the fried food had been affecting our digestive systems in a most undesired way. We were very worried she would be offended, angry or grumpy with us. To our surprise and relief she just started laughing, pointed at me, laughed some more, and told us she’d make us sauteed fish.

Ruth has been visiting me this week so we’ve been doing all the touristy stuff! Things got off to a slightly rocky start as, whilst doing our second tourist activity (the ballet), I managed to lose my purse/get my purse stolen (<<<<the differentiation between ‘lost’ and ‘stolen’ turned out later to be of vital importance). Getting my purse stolen is usurped as “The worst and most expensive and time-consumingly complex thing to happen to me ever” only by missing my plane to Austria. Therefore instead of enjoying the relaxing Cuban lifestyle, we spent the next couple of hours doing the appropriate credit-card-canceling phone calls,bag-searching and purse-searching and teary eyed things like that. Then we went to the police stations and embarked on The Worst Evening Of My Life (or maybe One Of the Worse Evenings…) The police station was stressful, time consuming and very confusing and made me feel very tired. You’ll be happy to hear, however, that they did let me go without charging me with anything.
The rest of the week passed very nicely. We did lots of good things like going to a baseball game, eating at the two BEST restuarants in Havana (apparently), walking through Old Havana, seeing the Buena Vista Social Club and drinking mojitos and we visited the Botanical Gardens.

The Croquetas are back, so I had biscuits for dinner. I tried to have juice but I broke the juice jug, there was juice and glass everywhere, and then I discovered another ant’s nest. Going to go out and drink Pina Coladas before I self-combust.

Today we played our vital role of representatives of the United Kingom of Great Britain and Northern Ireland by attending the University of Havana’s international fair. There were representatives from all sorts of different countries, like Syria, China and Djibuti. We were the only Europeans (except for Russia, but I choose to discount Russia), which made us feel pretty goddam cool, and our stall was very popular. We think this was because our blazing white bodies reflected the sun like huge beacons and drew the crowds like magpies to silver pennies. They asked us lots of questions, many of which we didn’t know the answer to, but thankfully years of oral examinations has given us a great skill of bullshitting. I had to bullshit a lot about Richard Branson, because he reatured on one of the stickers that the British Council had given us, and Margaret Thatcher, because of recent events. After an hour or so we began to realise a nearby table was usurping our clientele, and we were no longer the most popular stall in the courtyard!!!! It turned out the beastly Americans had opened up shop and, unlike us, they had no leaflets, photos, maps or informative info cards on offer, so they had just bought twenty five bottles of beer and were handing it out in plastic cups. It wasn’t even American beer! (Obviously.) Nevertheless their strategy worked, and all the visitors were grouped around and chanting things – until the beer ran out and the Chinese representatives started doing some traditional Chinese dancing in fancy costumes.