NB: I start this with a rant. I was going to delete it, because it's politically-charged, but then
I thought, maybe the political editor of the guardian or the daily mail or something will see it and hire me!!!!!!! :P

I knew this weekend was gonna be fab, as to start it off the charity my mother works for chose to retweet a politically-charged comment I made in response to David Cameron's enlightened and really GREAT idea to do a referendum on the EU. In school, some teachers asked me what I thought about it, but I was genuinely unable to answer. I had to take a break from the lesson and go and roll around in the snow to stop my BLOOD FROM BOILING. This isn't due to my emblazoned passion for the EU (even though I do love unions) but just because David Cameron is a wiggly little worm and it distressed me. In a vain attempt to express themselves in English, an Austrian friend eloquently described him as 'like a woman'. Obviously I was EXTREMELY indignant at that, I don't think anything so offensive has ever been said about womankind.

ANYWAY!!!!!!!! So this was my LAST WEEKEND in Austria! *crying face!!!* A friend's blog described leaving their first semester as 'bittersweet', and i think that is a perfect description. It's so sweet to know I'm escaping this crazy, crazy country, but then I will sincerely miss the cake, the schnitzel  the people and the teaching (maybe). I'm planning an inspirational, emotional and very serious retrospective piece about the whole experience, however progress is going kinda slowly on that one, so instead I thought I'd enrapture you with my weekend.

So this weekend I visited some of my friends (!!!!) in Burgenland! I've heard SO MUCH about Burgenland - an area of Austria known locally as "the arse of the world" - that when I passed the sign saying "welcome to Burgenland!" my stomach did a genuine flip of excitement! We went to a school ball on Saturday. As this was my fifth ball of the season, I've now seen it all. Children doing Gangham Style, children pretending to be chefs and setting things on fire, children stripping(!!!!). Should clarify that they're all over 16.

Anyway, we all felt a bit WORSE FOR WEAR on Sunday but we didn't mind because we were going to the SPAA!!! Loipersdorf is a natural spa and it is also INCREDIBLE! There were swimming pools indoors and outdoors, big slides, little caves and waterfalls, saunas, ice pools, whirlpools, sun beds, massages, a TV room (!), basically EVERYTHING you could ever want. It was soooo great! The best bit was swimming out into the open air pool, where we were surrounded by snow but the water was still really warm. This meant there was loads of steam rising from the water, which made visibility difficult...but NOT so difficult that we didn't witness several romantic couples getting a little bit TOO friendly for my liking. 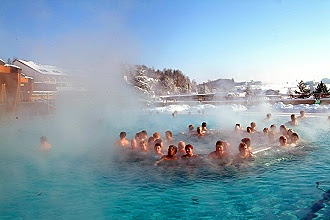 I thought the canoodling youngsters in the steamy pool would be the most graphic the day would get, but I was very mistaken. Naturally we wanted to get out money's worth and try out EVERYTHING so after the slides were shut we scampered to the sauna, which (because it's Austria) has a nudity policy. At first we thought this might be optional but it soon became apparent that keeping on your swimwear was FROWNED UPON, so seeing as we are liberal, adventurous individuals who love to try new things and blend in with the locals, we had to drop the towels. I'll be honest, I think I found my secret nudist in that sauna, because I felt to liberated and free! And sweaty. But mostly freee!!! I saw more naked bodies in that one hour period than I have seen in my entire life. So many naked old men!!!! We went to a sauna indoors and outdoors and then we jumped in to this tiny little NON-HEATED pool outside (let me remind you at this point that the warmest it got in Vienna this weekend was -6 and the coldest was -15). I did NOT enjoy the icy pool; everything was cold. There was cold water ALL OVER MY BODY. But overall it was just fab, and a great experience and a brilliant way to bond!!!!!!!!!!! :P

The spa was very relaxing. In fact, we were so relaxed, we nearly missed the bus home. This would have been disasterous, as there was only one bus that went to Vienna. However, thankfully we made it and about five hours later I made it safely home, after a predictable ridiculously confusing journey through Vienna's absurdly unclear underground system. I truly cannot repeat what I was muttering as I stomped through the stations, but it was mainly focused on the complete lack of maps there. On the train I also risked being frisked as a load of police got on and started checking people I.D.'s. Thankfully they did not check mine.