Last night, I stole my parents car to pick up an old school friend from town, but because Austrian cars are the opposite way round, I got really confused with the pedals and accidentally crashed it into a sports car with two newlyweds and their four children. I was really worrying about how to go about telling my parents, and how I'd afford to pay for this smashed up car, but then I noticed that the newlyweds were both giant bears, and realised I was dreaming. Man, was I relieved!!

I only have three weeks left in Amstetten, so I have decided to make the most of my time here. This week I dedicated my free time to succesfully completing a game of four suit spider solitaire. Despite initial difficulties (26 games lost), after googling "How to win four suit spider solitaire" I have become a bit of a 'pro'. So far I have won three games, with a current win percentage of 9%. As you can see from the screenshot below, I like to make patterns with the suits as I go. This is the first pattern I managed to get it black, red, black, red. In my HUMBLE opinion, if you don't get a pattern with your suits then YOU HAVE WON NOTHING. 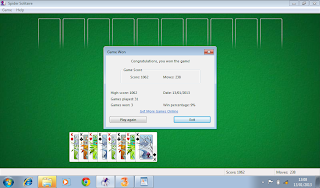 Going back to school was really rubbish because now school starts at 7.25am. Due to what I describe as "severe jet lag", on Monday morning it felt like 6.25am which is QUITE ungodly. Today I was back at Melk. I woke up this morning to a beautifully white Amstetten. Before Christmas, when it snowed, Amstetten's local authority where pretty snappy about laying out grit. In fact, they put out grit so early that I used the grit van, driving past my window, as an alarm clock. By the time I left the house the roads where SAFE and GREY. However, this morning they decided to let the beautiful white snow be, and even though I wasn't in school until 9.50, I walked (slowly and carefuuly) to the train station through snow so white it was like I was walking through clouds in heaven. Everyone had to take their time to avoid accidents, even the motorists drove their cars slowly and carefully (which caused them to be QUITE MURDEROUSLY quiet!)

Here's a myth-busting fact: one day someone may tell you that Austrian trains are very reliable and always run on time. I implore you to quickly correct them and say "I must disagree. In Austria, when it is winter, and it snows, the trains will always run late. UNLESS: I REPEAT UNLESSSS: you yourself are running late. Then - and only THEN!!!!!!!!! - will they leave early!" Now, if the POOR BUGGER with the FALSE FACT has any sense about them, he may well reply, "but it snows every year in Austria, so surely the train companies know how to deal with snow." If anyone says that to you, raise your eyebrows significantly and give one, solemn nod. AUSTRIAN TRAINS ARE LIKE BRITISH TRAINS!!!!!!!!!!!! Except you  get to ride through the little mountains and forests all covered in snow and looking like Narnia!!!

What with all the solitaire-playing, I haven't achieved much else this week, though I did manage to squeeze in one social engagement. On Friday, the other assistant and I went to the Italian ball. As with most social events I go to in Amstetten, we were the youngest patrons by at LEAST 20 years, if not 30. The Italian Ball had an Italian Theme, with Italian food and Italian wine. There was a tombola where everyone won a prize! We won a sausage!

ONE LAST THING: on the way back from Power Plate today I had a bit of an 'existential crisis', where I really thought about the fact that my name is SARAH, and that when people think about ME you probably think "Sarah"! or sometimes when you think "Sarah" you think about ME, but when I think about me I never think 'Sarah'. But if someone says "Sarah!" sometimes I'll turn around quickly and see if they want me. And everyone here calls me Sara, and at first I thought this was cool and European, and now I'm like, well it's wrong. And even uglier than Sarah. So as I sign off, I advise that if you haven't recently, maybe it's time for YOU to really think about how YOUR name is your name!!!!
so, toodleoo,
kisses from the missus
xoxo